036: Diving Deeper into Tension and Length 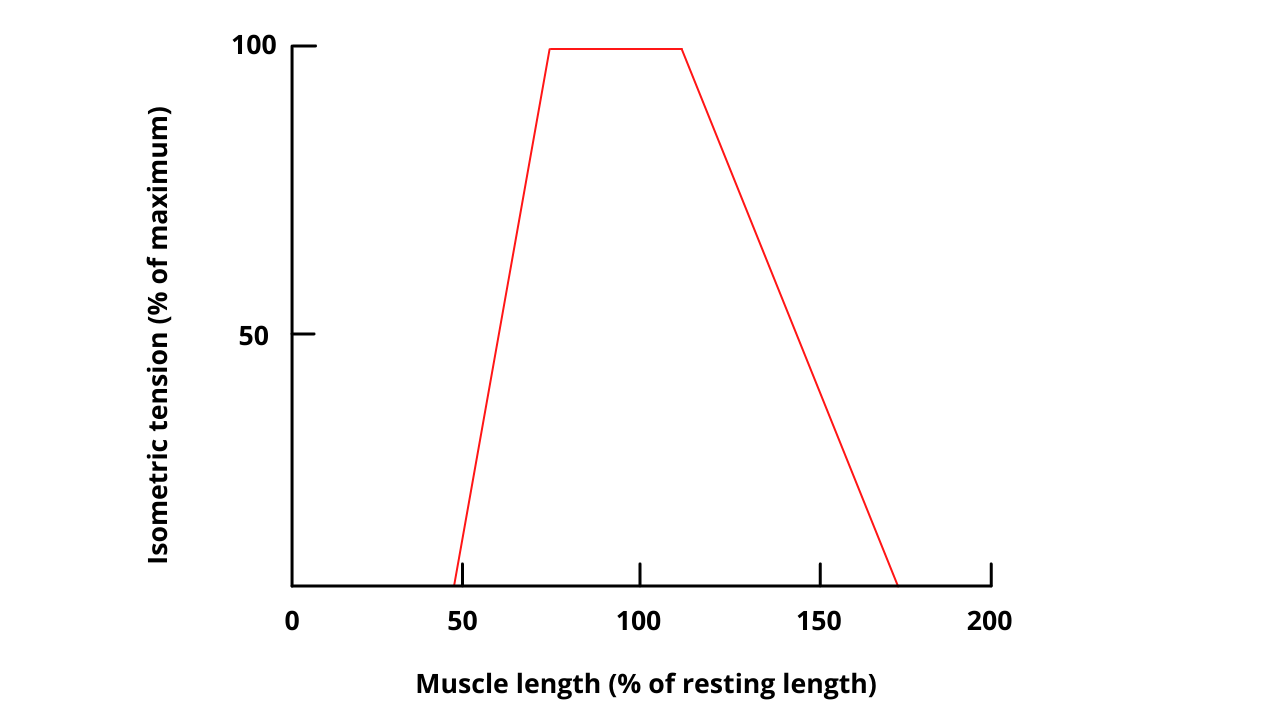 A reader asked me to expand on my previous discussions of the relationship between tension and muscle length, which is an essential topic in the biomechanics of skeletal muscle because the size of active tension developed by a muscle depends on the muscle's length at which the tension is measured.

During lab experiments, when the nerve controlling a muscle is artificially stimulated, the resulting nerve impulse causes the myofilaments within the individual myofibrils to interact.

The myofilaments interact by sliding past each other (sliding filament theory), generating a force that tends to shorten the muscle fibres, and therefore causes the whole muscle to shorten.

However, whether or not the muscle shortens depends on the load attached to the muscle sample.

Force in an activated muscle is called active tension, and only if the active tension is big enough to equal the weight of the load will the muscle shorten and move the load.

When the amount of muscle tension is less than the weight of the load, the muscle will perform an isometric ('same length') contraction because its length doesn't change, even though its tension increases.

Lab experiments that measure a muscle's magnitude of isometric tension at specific lengths consist of an isolated muscle attached to a load it cannot lift; when activated, the muscle's tension is detected by a strain gauge device.

When the muscle produces tension that is large enough to overcome the weight of the load, it performs an isotonic ('same tension') contraction because the size of its tension doesn't change once it reaches the level needed to move the load.

In the lab experiment type mentioned above, the strain gauge detects the increase in tension (as it does with isometric contractions), but when the tension reaches the level required to move the load, the tension levels off, and the muscle fibres shorten, lifting the load.

While the muscle fibres shorten, the tension remains constant and equal to the load, because the weight of the load is what determines the contraction sensed by the strain gauge.

Researchers often use isometric contractions to determine the maximal force production potential of a muscle sample, which, as stated above, is dependent on the muscle's length when tension is measured.

The relationship between isometric tension and muscle length enables us to relate the tension of the whole muscle to the sarcomeres (microscopic contractile units) within each individual muscle fibre and the sliding filament theory.

When a strain gauge detects muscle tension at various muscle lengths, we can see differences in the ability of the muscle to produce tension of a given magnitude.

When the muscle is stretched beyond its normal resting length, the tension it produces when stimulated falls off sharply, dropping to zero near 175% of its resting length.

Current understanding states that this behaviour is caused by the state of the thin and thick filaments in each sarcomere.

As the muscle stretches, the distance between the Z-lines (borders between each contractile unit) increases, causing the amount of overlap between the thin and thick filaments to decrease.

When the amount of overlap decreases, the number of myosin heads available to form cross-bridges is diminished, eventually reaching a degree of stretch where there is no overlap and therefore no tension can be generated.

Isometric tension reduces when the muscle sample is shortened too, and it drops to zero at around 50% of resting length.

During shortening, the overlap between thin filaments and neighbouring Z-lines distorts the spatial relation between thin and thick filaments which is needed to create cross-bridges; once again, there are less (and, ultimately, zero) cross-bridges available for the muscle to generate tension.

These geometric effects of muscle explain why we are naturally weaker at short and long muscle lengths.

However, we can improve strength at both ends of range of motion, and muscles are capable of altering their optimal force-length curves to meet the demands of a given sport or activity.

Since muscles can always passively lengthen further than they can be actively shortened, a person's greatest level of achievable flexibility will always be under static passive conditions.