009: How Do Length and Velocity Affect Muscle Mechanics? 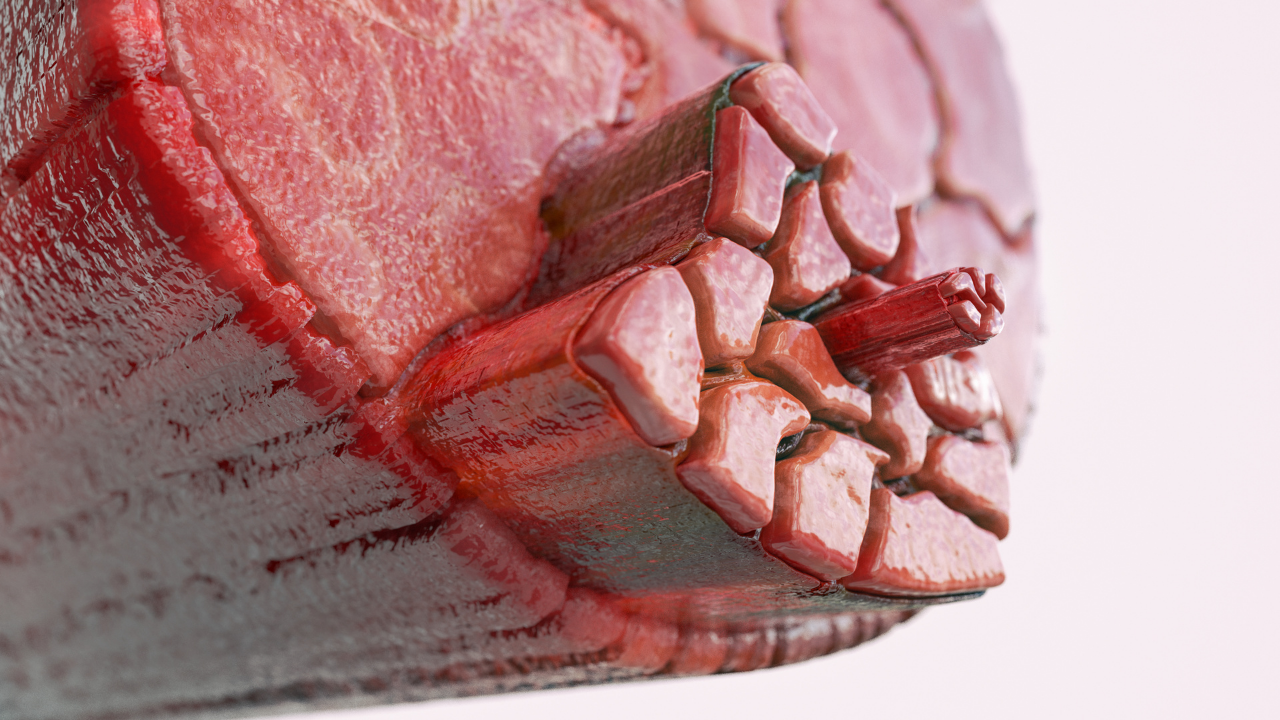 The phrase "muscle mechanics" refers to a muscle's ability to produce force, which depends on the length and velocity of its fibres. The image below illustrates muscle's simplified force-length and force-velocity properties as per the current body of evidence (Zajac, 1989; McMahon, 1984; Lieber, 2002). 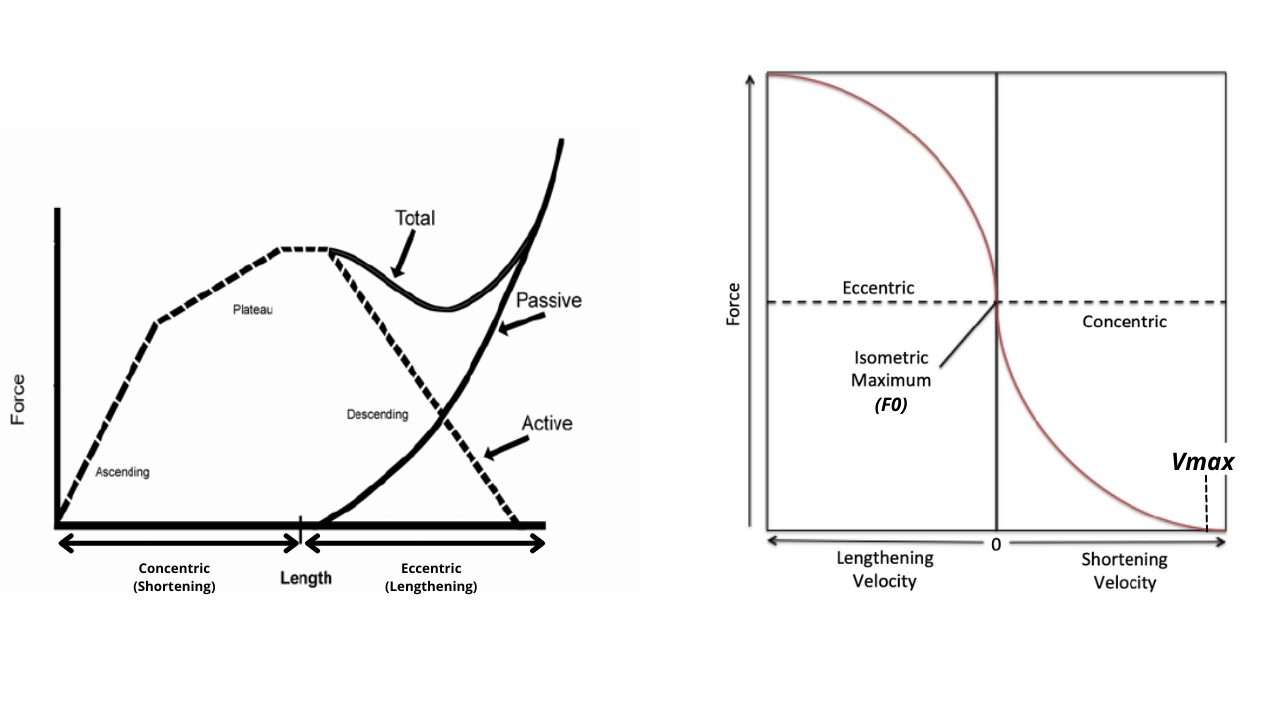 You have probably seen the above diagrams if you have ever read a textbook on exercise science. The properties are often described in terms of normalised muscle fibre length and velocity, where the maximal isometric (i.e., static and constant length) force a muscle can produce is F0.

The diagram on the left shows the isometric force-length properties of a muscle (absent of the tendon) when it is fully activated. The passive force (passive tension) arises by stretching the muscle's connective tissue elements. The sarcomeres create active force (active tension). Think of the sarcomeres as molecular motors that form the foundation of all neurally-controlled muscle activity. Active force is assumed to scale linearly with increased muscle fibre activation. In contrast, passive force is believed to be independent and therefore unaffected by voluntary activation.

The diagram on the right shows the force-velocity relationship when a muscle is maximally activated. The force at zero normalised fibre velocity is labelled F0. An applied constant force less than F0 causes the muscle to shorten; a force greater than F0 causes it to lengthen. Understand that in both of these diagrams, the tendon properties have been excluded; including a tendon will affect the force-length and force-velocity of the entire muscle-tendon complex because of the tendon's compliance (Miller, 2014). 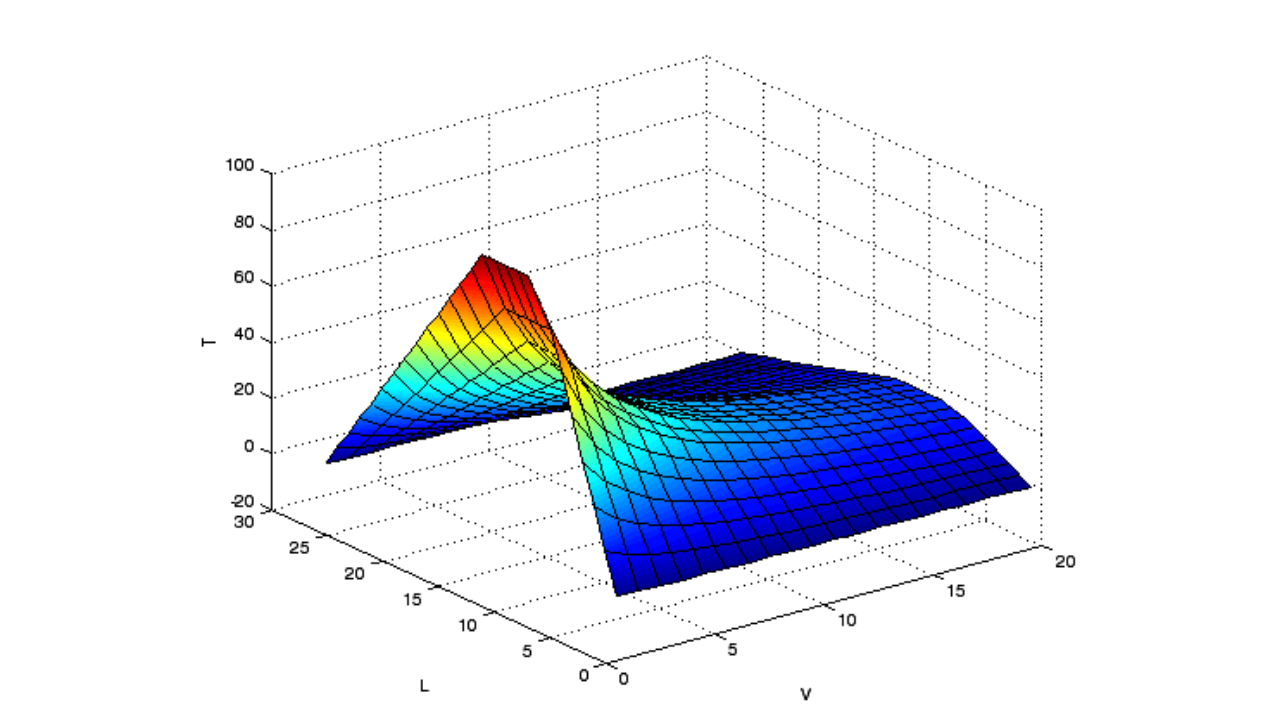 Another critical point to remember is that even after many decades of research, we still don't know if force-length and force-velocity properties combine and superimpose in such a linear way as presented in these models. The properties of force-length and force-velocity remain active fields of biomechanical research, and many scientists remain sceptical of the validity of the above models (Keenan et al., 2009; Biewener et al., 2014; Tsianos, Rustin, & Loeb, 2012; Rehorn, Schroer, & Blemker, 2014; Cheng, Brown, & Loeb, 2000).

However, despite continued scepticism of these models, the effects of force-length and force-velocity are undeniable. Furthermore, the numerical approximations disseminated over the years have given us reasonable working hypotheses to create and use musculoskeletal models (Valero-Cuevas et al., 2009).

These models enable us to understand that the capacity to produce static force suffers greatly if muscle fibres are too short or too long. We can also understand how, during a concentric contraction, the force capacity drops precipitously as the shortening velocity increases. (The point that muscles are thought to no longer produce concentric force is marked on the right-hand side diagram in the first image as Vmax, indicating the maximal shortening velocity). This maximal shortening velocity is considered to be about five muscle fibre lengths per second. Put simply, the faster you try to concentrically contract your muscles, the less active force they can produce. This velocity-dependent force deficit is hindered even further when the antagonist (lengthening) muscle resists the movement owing to poor extensibility. However, while you may produce less active force in the agonist muscles as they rapidly contract, you can minimise the negative effect on the speed of your dynamic flexibility by improving the ability of the antagonists to lengthen by stretching them often.

Conversely, because muscles can only actively pull and not push, an eccentric contraction is by definition a resistance to an externally imposed lengthening. Muscles can produce eccentric forces about 50% higher than their maximal static (isometric) force. This is because the cross-bridges in their sarcomeres are pulled apart during eccentric actions, which takes more force than the force the cross-bridges can produce under isometric conditions.

However, keep in mind that such forced stretching as occurs during eccentric actions can (and does) cause injuries. At high enough velocities, it can completely rupture the muscle. Therefore, I highly recommend developing a minimum level of mechanical strength (tissue tolerance) and muscular strength in muscles before subjecting them to dedicated eccentric training. When the tissues are adequately prepared, eccentric-focused stretching can be a very powerful tool in your training arsenal for increasing flexibility, strength, power, stretch-shortening cycle functions, and treating tendinopathies (O'Sullivan, McAuliffe, & DeBurca, 2012; Douglas et al., 2017; Murtagh & Ihm, 2013).